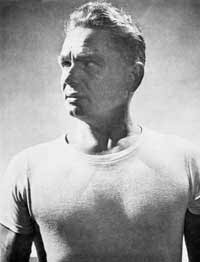 Born Joseph Hubertus Pilates in December 9, 1883 in Monchengladbach, Germany, Pilates was originally a gymnast and bodybuilder, but when he moved to England in 1912, he earned a living as a professional boxer, a circus-performer, and a self-defense trainer at police schools and Scotland Yard. During World War I the British authorities interned him, along with other German citizens, in Lancaster Castle, where he taught wrestling and self-defence, boasting that his students would emerge stronger than they were before their internment. It was there that he began refining and teaching his minimal equipment system of mat exercises that later became “Contrology®”. He was then transferred to another internment camp at Knockaloe on the Isle of Man. During that involuntary break, he began to intensively develop his concept of an integrated, comprehensive system of physical exercise, which he himself called “Contrology®”.[4] He studied yoga and the movements of animals and trained his fellow inmates in fitness and exercises.
On the ship to America, it is believed he met his future wife Clara. The couple founded a studio in New York City and directly taught and supervised their students well into the 1960s. “Contrology®”, related to encouraging the use of the mind to control muscles, focusing attention on core postural muscles that help keep the body balanced and provide support for the spine. In particular, Pilates exercises teach awareness of breath and of alignment of the spine, and strengthen the deep torso and abdominal muscles.[6]
Joseph and Clara Pilates soon established a devoted following in the local dance and performing-arts community of New York. Well-known dancers became devotees and regularly sent their students to the Pilates for training and rehabilitation. His exercise regimen built flexibility, strength and stamina. Soon after it became known that ballerinas were attending the Pilates gym on 8th Avenue, society women followed.
Joseph Pilates wrote several books, including Return to Life through Contrology® and Your Health, and he was also a prolific inventor, with over 26 patents cited. Today Pilates is practiced all around the world.
Joseph Pilates died in 1967 at the age of 83 in New York.

Joseph Pilates’ lifelong interest in body conditioning began when he was a child, seeking ways to develop his own frail body. A native of Germany, he became an accomplished skier, diver, and gymnast. While training to be a boxer in England, he performed in the circus and taught self-defense to Scotland Yard detectives.

As a nurse in World War I, he experimented with springs attached to hospital beds to strengthen patients, and to allow them to begin moving before they could get out of bed. His then revolutionary discoveries led him to design the Universal Reformer, and the mat exercises, that became the foundation of the Pilates Method. In 1923, he came to the United States, bringing with him the physical training system that’s continued to grow in sophistication and popularity.

Today, the Pilates Method is used by dance companies throughout the world, as well as by Olympic Athletes, professional athletes, and sports teams. Fitness centers increasingly find the Pilates Method to be the preferred exercise system for individuals of all ages.

What is the Pilates Method of Body Conditioning?

Pilates may be the most well-balanced method of body conditioning that exists. It builds strength and flexibility, creating an ease of control of posture and movement. Although best recognized for its emphasis on core strength, the Pilates method of body conditioning works on the entire body. Whether you are young or old, a dancer or athlete, or are looking to get back into shape, Pilates can be tailored to your level and ability. Focusing on concentration, control, centering, precision, flow of movement, and breathing, Pilates leaves you refreshed and alert, with a feeling of physical and mental well-being.

We are very pleased to announce 📣 MeJo Wiggin a

@ascpit is coming to Taiwan! Our Module I starts F

Enjoying my last few days in this beautiful place

Repost via • @kristenmmcafee Classes this week!

We are very pleased to announce 📣 MeJo Wiggin a